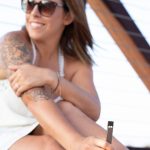 CBD Vaping Pens they settled on the Select CBD Cinnamon Pen Relax version because…well, hell, if it was going to be stressful learning how to use it, they might as well be able to relax afterwards! Right?!?

Finding the product page on the KVR Web Site was easy, as was the link to purchase it and the ease of ordering it from the Select CBD Web Site. In fact, if you use our EXCLUSIVE KVR Coupon Code: KVR20 at Checkout, you’ll save an EXTRA! 20% Just 2 days later, the package arrived. That was FAST! Shipping speed is usually a good indicator of the service you’ll get from a company, and this was one was quick as a bug’s blink! Opening the generic shipping box, we found this: 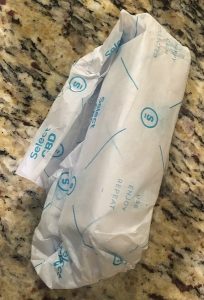 which was a very professional and upscale looking wrap for such a small item. So far, so good. Unwrapping the packaging paper from the pen produced another very professional looking product – the actual box that the CBD Vape Pen came in: 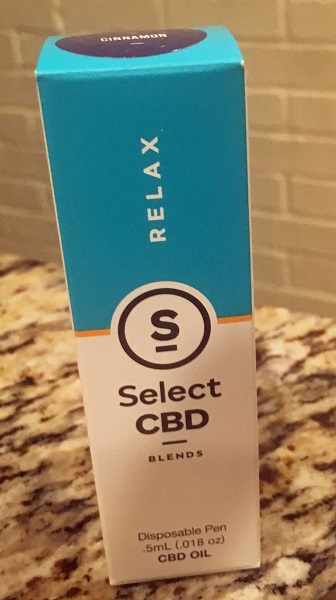 which was actually much smaller than they said they had anticipated. Judging from the picture on the site – and their mental image of what it would look like – the actual box was around 4″ tall and around 1.5″ wide. Nonetheless, everything was going smoothly and the belief began to get stronger that this was going to be every bit as good as previous CBD products they had sampled. Their confidence in the quality of the CBD within the Pen and the thoroughness of Select CBD as a company was further enhanced by this part of the box:

which had very detailed and specific information regarding when the Vape Pen was made; when it was Lab Tested; what those Lab Tests were looking for (in this case, it seemed like Pesticides – or a lack thereof – was the primary concern); how much CBD was in it; how much THC was in it (VERY important for those wanting to make sure they are not breaking any laws and won’t be potentially having any testing issues); a warning about the fact that it contains coconut in case someone had allergies to it; a basic vaping suggested serving time; and finally, an “Activation Time” of 15 minutes. Ahh…., they thought, once the Vape Pen is unpackaged, it will have to be charged for 15 minutes before it can be used. “I hope it came with a USB Cable,” they thought to themselves.

So, now to the Pen! Unwrapping the box, they only found this:

Did they miss something? They looked inside the box again. Nope, nothing. Wait! Maybe there’s a hidden section at the bottom of the box. Carefully unhinging the small area at the bottom of the box so as to not tear any of the instruction paper that surely must be inside, they did so to find nothing there either. Oh, you know what, it must not have included any instructions. And there’s no charging cable either. Come to think of it :picking up the pen and carefully examining it again: there’s no place to plug a cable in to it to charge it anyways. How does this thing work??? And how do you peel off the white sticker at the tip?? Looking over everything again for the next 10 minutes, they still couldn’t figure out how it worked, or where it plugged into. Did it need batteries? Was there something else you have to purchase with it? Vexing questions indeed! They called up a friend who was no help either, except to suggest at the end, “Have you looked it up on YouTube?” Of course! YouTube! That will tell them what they’re missing and how to charge it.

So, just five short minutes later, they found a YouTube video on the very same pen. And what a shock it was! Not only was it not missing anything or require something else to purchase, it didn’t even need charging! It was already ready to go.

If only. If only the packaging had included some very basic information inside that said it was ready to go right out of the box. That would have made a Newbie’s introduction to CBD Vaping much easier and less time consuming.

The Select CBD Vaping Experience:
This part of the Newbie’s introduction to CBD Vaping was a very enjoyable one. As advertised, it had a wonderful cinnamon taste. While the instructions suggested one 6-second “vape”; two 3-second vapes were tried instead. And as also advertised, the sensation was calming and stress-reducing. Anxiety angst was quickly a thing of the past. A hint of impending back pain was also alleviated within the first 5-10 minutes, so this particular CBD also seemed to have effective anti-inflammatory properties. The effects of stress-free bliss and pain relief lasted for around 2 hours. If you are new to CBD; or CBD Vaping, our tester can highly recommend purchasing the Select CBD 250mg Relax | Cinnamon CBD Vape Pen. They also hope that reading about their first experience makes yours go smoothly!